On Sept 12th 2010 the Swim the Kyle even began with Libby Earle, daughter of the late Captain Guy Earle Inviting the former  Mayor Don Coombs, brother and his wife Dennis and Louise Marshall and friends with  Ed Swaine doing the very first interview. The Swim was to bring awareness to the SS Kyle and her desperate needs of rustoration’s in Memory of her Dad and All the captains, & Crew before him. The swim began at 12 pm just a day after the Hurricane Igor making it a little rough with the winds blowing her away from touching the Bow Hull. With determination and will power she over came the winds and managed to reach her goal.  With Search and Rescue along side her all the way she did hitch a ride back in, 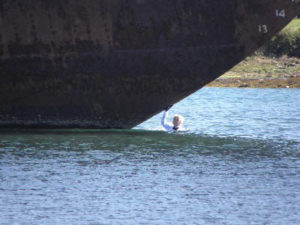 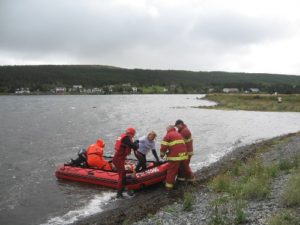 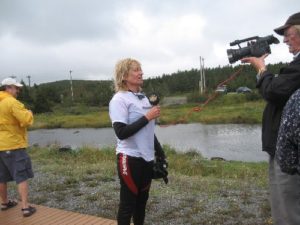 Over the Years the Event became larger and larger and in 2014 was the Largest one day even that Harbour Grace has had in over a decade.  There was those who helped support such as Kelly Russell whom’s Dad wrote the famous poem “Smoke Room on the Kyle and other well known Artist Sandy Morris who joined in the swim along with others in 2013. The event was always the 2nd weekend of September until the Town of Harbour Grace wanted to move it to  July to draw more attendance. In 2014 there were 5 swimmers with Libby’s Husband Brian DePiero being one of them.   Each Year Kelly Russell would attend and launch the event after his reciting “Smokeroom on the Kyle and twice filmed aboard the SS Kyle for the 1st time. In 2015 the town of of Harbour Grace decided to contact Libby and said that the Town is not responsible for anyone in the water, only on land. Libby then Cancelled the swim and did not attend what the town now called it SS Kyle Festival that did not go over well with little attendance. in 2016 the town has mentioned a word about the event.