History of the SS Kyle

Used in the Canadian National Railway.

Carried Passenger, Cargo, Mail and a Dr. to Whom needed medical attention port to port

Carried Newfoundland & Canadian troops for preparation for battle on the front lines in Europe.

Carried Fisherman back and forth from Carbonear to Labrador.

Kyle breaks her mooring from a violent storm Feb. 4, 1967 and is relocated at her final resting grounds in Riverhead Harbour Grace. Guy Earle died February 19, 1968

Funding raised for paint in 1996 for Matthew Celebration

Only ship left in the Reid’s Alphabet Fleet

The SS Kyle around Newfoundland is Know only as KYLE, she is the most well known ship on the island to date. Please help us continue her legacy and dedicate the Memorial / Museum to those who she has served. Donations can me made through our Paypal account Donate@sskyle.org  Thank you

Captain Lorenzo Stevenson first to sail through the Narrows on May 20th 1913.

Thanks to his Grandson Peter Stevenson for the Photo in 2010 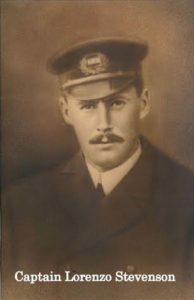 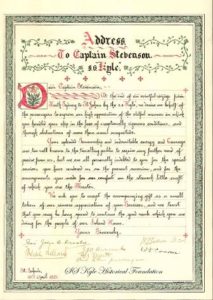 The ship was to join the Reid Newfoundland Coastal Fleet to provide a Labrador region with it’s first regularly scheduled service. The S.S. Kyle was the 10th ship to join the Reid Newfoundland Company’s prestigious Alphabet Fleet. Although it may not have had the grandeur of some of the ships in the fleet it was the fastest and having been strengthened for ice was the strongest as well. For this reason the S.S. Kyle was sometimes used as an ice breaker. During it’s lifetime the Kyle was known as Newfoundlander’s “Bulldog of the North” provided many valuable services to citizens of Newfoundland and Labrador. In addition to passengers and cargo, the Kyle also carried a doctor whom the people would receive medical attention from.

Before Confederation the S.S. Kyle was operated by the Commission Government. In 1915, after two years as a coastal boat on Newfoundland’s northeast coast, the S.S. Kyle was appointed to the North Sydney/Port aux Basque ferry. The ship began working with the Canadian National Railway in 1923 when they took over the duties of the Reid Newfoundland Company’s coastal/railway service. She played a vital role in World War II as she was called on to carry Newfoundland troops to the mainland to join Canadian troops in preparation for the battle on the front lines in Europe.

In 1926, the ship returned to the Labrador service where it became a vital part of life for the citizens of Labrador. The vessel provided Labrador with it’s first regularly scheduled ferry service. For years, the S.S. Kyle ferried fisherman back and forth between the Carbonear area and the Labrador coast during the spring and summer months. Often being the only link between Labrador and the outside world, the Kyle provided both stationers and permanent residents of Labrador with supplies, transportation, mail service and medical care. In addition, the vessel enabled clergy to visit isolated communities and it provided transportation for children attending boarding schools.

Heard around the World – Wing found

The name SS Kyle was Heard around the world in 1927 after she Locates Old Glory, the Mono-plane owned by New York Daily Mirror , after the failed searches by 52 other ships. 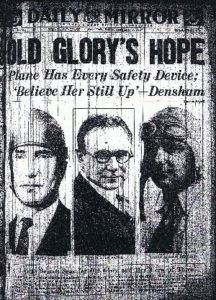 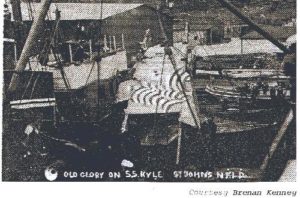 When Newfoundland entered into Confederation with Canada in 1949, the S.S. Kyle was purchased by Canadian National Railways. It was then re-assigned to the North Sydney/Port aux Basque ferry service, it was used as an icebreaker in the Botwood Bay of Islands area, and it continued to service Labrador. In 1958 the vessel was sold to Nova Scotian and American interests. It became the property of Shaw Steamships Co. Ltd. where it was renamed the “Arctic Eagle” and registered at Halifax, Nova Scotia and used in the seal fishery 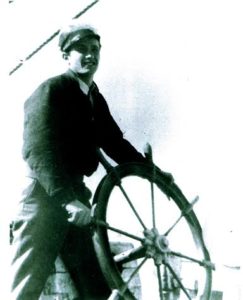 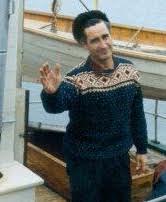 In 1961, Guy Earle of the “Earle Brothers Freighting Company” of Carbonear purchased the vessel for $100,000.00 and he then proceeded to form a company called Kyle Shipping Ltd. On January 21, 1961 Fred’s brother Guy Earle traveled to Halifax and brought the ship back to Newfoundland where they gave it back it’s old name. Now renamed back to her original as the SS Kyle. The Earle brothers had traveled extensively on the Kyle during it’s days on the coastal service they were quite familiar with the ship. Knowing that the Kyle’s hull had been strengthened for ice the Earle’s decided that they would convert the Kyle into a sealing vessel. For the next seven springs, under the command of Captain Guy Earle the S.S. Kyle carried scores of anxious men to and from the Front where the annual seal hunt took place. The S.S. Kyle had only minimal damages in her voyages to and from the Front until 1965.

In this same year 1965 the S.S. Kyle out at the seal hunt and got caught in the drifting ice and heavy winds. Not being able to move and only drift with the tides and sandwiched in the Ice, the SS Kyle was eventually caught up against a grounded 10 story high Ice burg. After telegramming and waiting 3 days in the Ice waiting for an Icebreaker, The SS Kyle was finally free and the damage was assessed. One of the water line steel hull panels just forward of mid ship on the Port side was ripped open and 21 rivets had popped. The Damage was excessive and needed immediate repairs. Between Heber McGurk the Master Watch being lowered over the side in a boatswain’s chairs and the crews mechanic down inside the hull, Heber hammered the plate as flat as he could get and between the two of them bolted the panel tight. Heber had changed this cloths 3 times before the plate was sealed. A smaller 1″ hole on the in Port side between the Mid ship and the Stern and the water was pouring inside like a garden hose and from the inside the Mechanic drove a large punch, jamming it to stop the leak. Heber had told Libby and I that the punch stuck out the Hull about 6-8 Inches and at Low Tide it may be able to be seen.

The Kyle Now Damaged in excess of $100.000.00 was taken out of service so that a decision could be made about her future. Two Years Later on February 4th, 1967, a violent storm broke out consisting of powerful winds and waves. It was during this storm that the Kyle was torn from her moorings and blown to Riverhead, Harbour Grace. Now usually when a ship breaks anchor it is headed for tragedy on the Harbour’s beaches but this was not so for the Kyle. Seafarers and fishermen alike claim that it was not the Kyle’s destiny to go to an underwater grave. Instead, they are of the opinion that the Kyle was actually guided to it’s resting place in Riverhead by the “seamen’s ghost” – where its illustrious past would never be forgotten. The Earle brothers, faced with an expensive salvage operation, decided to flood the hull of the ship to prevent further drifting. And so, to this day “the last of the coal burners” has come to know Riverhead Harbour Grace as its final resting place. Visible from the highway entering Harbour Grace, the S.S. Kyle stands as a living monument of a way of life long forgotten by many Newfoundlander’s.

Dominion Metals, a St. John’s salvage company purchased the ship and sold it to the Provincial Government of Newfoundland for $4,000.00 in 1972. Later, when Dr. A.T.Gus Rowe became MHA for Carbonear, he announced plans to have the historic ship towed to Salmon Cove where it would be converted into a floating museum. At this time only minimal deterioration had occurred and preservation of the S.S. Kyle was still possible. However, the idea of moving the S.S. Kyle met with much controversy and when it was discovered that the cost of such a program was so great, the plans were discarded.

In December of 1996, almost 30 years after the vessel had found its resting place just off Stapleton’s Beach, the years of lobbying the Federal and Provincial governments paid off. At this time the Town of Harbour Grace, under the direction of Mayor Don Coombs, secured a partnership with both of these governments (Hon.Fred J. Miffin, MP Bonavista Trinity Conception & Hon. Arthur D. Reid, MHA Carbonear Harbour Grace) for an initial step in the restoration of the Kyle. The ship’s exterior would be painted in its original colors once more. The hull would be pained black and white and the smokestack would be painted canary yellow. As of April 1997, this dream has become a reality and now tourists and citizens of Newfoundland alike can see the S.S. Kyle in much of its original splendor

The Kearney Tourist Chalet was built in 1995 and is located near the Spirit of Harbour Grace. This structure is a replica of the “Beacon Light” which was used for the design at the centre of our flag which is featured on the cover of this book. The chalet is named after Michael Condon Kearney who built the lighthouse at the Point of Beach. Operating from June to September each year, visitors to the chalet can obtain information about Newfoundland and Labrador, purchase souvenirs, postcards, or maps. In 1998, a “Kyle” room was attached to the chalet containing artifacts and information about the S.S. Kyle. Located outside of the chalet are two history boards, one of which was donated to the town by the Johnson Family Foundation. One of these boards contains information pertaining to the S.S. Kyle, while the other contains information regarding the town of Harbour Grace.

In the years since our first settlers landed here in the 1500’s, Harbour Grace has been visited by pirates, pioneers, princes and princesses  among others.

The Alphabet Fleet started with eight boats which were built in Scotland beginning in 1897. The Argyle, Bruce, Clyde, Dundee, Ethie, Fife, Glencoe and Home, each given a Scottish name by the Reid family whose ancestry comes from Scotland. In subsequent years the fleet was increased by the addition of new vessels: the Inverness, Kyle, Lintrose and the Meigle. As the fleet name suggests, all ship names began with consecutive letters of the alphabet. The Alphabet Fleet gradually disappeared from Newfoundland and by the 1970s the Kyle was the only one left in the Province. Property of the Newfoundland Government, she lies beached at Riverhead, Harbour Grace.